Chyna’s brain to be studied for CTE 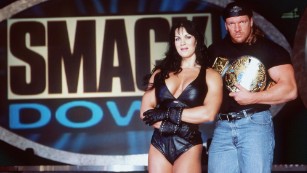 Chyna’s brain will be studied by Bennet Omalu,MD according to a spokesperson, Anthony Anzalo. Chyna, or Joan Lauer, was known for her role as one of the first women in professional wresting and later as an actor and entertainer. She is believed to have experienced many concussions in the wresting ring which contributed to her health problems. Dr. Omalu is  the neuropathologist who first identified the concussion-based changes in brain of the retired Pittsburgh Steeler, Mike Webster and went on to recognize the disease in the brains of other deceased footballers and challenge the NFL’s position on football risks. Dr. Omalu identified the collection of Tau protein deposits as Chronic Traumatic Encephalopathy or CTE. Other retired pro-footballers have also been identified at having CTE and the possibility of the condition is suspected in other sports, including NASCAR and recently in women’s soccer. Dale Earnhardt Jr., a NASCAR champion, has disclosed that he will donate his brain for study upon his death.